Posted on Apr 5, 2021 in Audio, Editorial, Your Texas Agriculture Minute 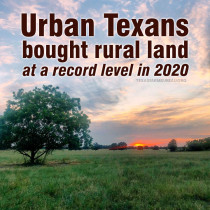 The dream of many Texans is to buy a piece of it and become a proud landowner.

The sentiment became a stampede in 2020.

There were 7,684 land sales. That’s a big number. It represents an increase of nearly 29% over the previous year.

As expected, the much higher demand for rural land drove the average price per acre up 3% to $3,064.

The Center says rural markets near Austin, Waco and the Hill Country saw some of the largest growth in the state.

The desire to own rural land is understandable. Let’s hope the properties remain working lands, because Texas agriculture needs every acre it can hold on to.