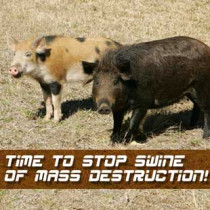 Texas is infested with hogs—feral hogs. Hogs that were once captive are out running wild along with their descendants. In the process, they are laying waste to the countryside.

Think small, miniature bulldozers. They root up rangeland, which can cause damage to equipment and injury to operators. They dig up planted crops and they may attack pets and people when they feel threatened.

Feral hogs have no natural enemies. With a thick layer of fat, not even rattlesnake bites bother them all that much. They’ve been known to eat rattlesnakes. And roving packs of feral hogs have caused traffic accidents.

The 2.6 million feral hogs believed to be in Texas cause $52 million a year in agricultural losses alone.

As the Legislature returns to Austin—this is just a reminder that there are a lot of problems in the state. Not all of them can be solved with a tax cut.