Posted on May 10, 2021 in Audio, Editorial, Featured, Your Texas Agriculture Minute 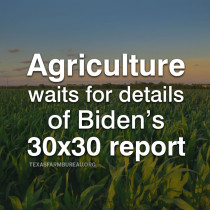 The Biden administration released its Conserving and Restoring America the Beautiful report.

Agriculture’s reaction thus far is the report is big on ideas, but short on details.

It’s a philosophical document that identifies eight principles. Some of the principles are welcomed, such as incentive-based and voluntary conservation, personal property rights and continued ranching on public lands.

The specifics of implementation, however, remain to be seen.

The report does recognize the oversized contributions of farmers and ranchers to conservation while feeding the world. That’s good.

Let’s hope that recognition is carried through implementation.