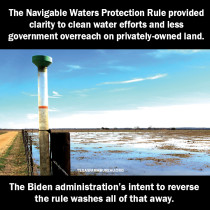 Rewrite of water rule is tidal wave of disappointment

Deeply concerned is one way to describe the reaction. An expected fight over land use is another way to look at it.

The less than one-year-old rule provided clarity and certainty to clean water efforts. The EPA’s intention to reverse the rule washes all of that away.

Concerns by farmers and ranchers were ignored. A return to overreaching regulation will deeply damage agriculture’s trust in EPA leadership.

If the term “navigable” is taken out of the Clean Water Act in the rewrite, a new wave of issues begins. Does the new rule protect water or regulate land use?

The flawed, overly complicated and excessive regulations of the 2015 WOTUS Rule have no place in today’s environment.

Farmers and ranchers shouldn’t need a team of lawyers and consultants to farm and ranch, but a rewrite of the rule could do just that.