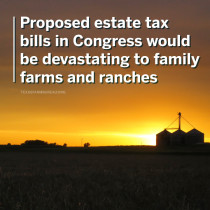 The Agricultural and Food Policy Center at Texas A&M ran the numbers. What it found was that two proposals in Congress to change current estate tax law would hit family farmers extremely hard.

The Sensible Taxation and Equity Promotion Act or STEP Act proposes to eliminate stepped-up basis upon death of the owner. The For the 99.5 Percent Act (99.5% Act) would decrease the estate tax exemption to $3.5 million ($7 million per couple), among other things.

By contrast, under the STEP Act, 92 of the 94 representative farms would be impacted, with additional tax liabilities incurred averaging $726,104 per farm.

Under the 99.5% Act, 41 of the 92 representative farms would be impacted, with additional tax liabilities incurred averaging $2.17 million per farm.

If both the STEP Act and the 99.5% Act were simultaneously implemented, the policy center says 92 of the 94 representative farms would be impacted, with additional tax liabilities incurred averaging $1.43 million per farm across the 92 representative farms.