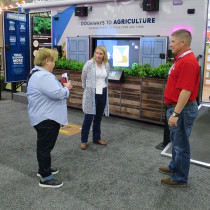 The Texas Restaurant Association welcomed about 3,000 people to its Marketplace trade show in San Antonio recently.

Restaurant owners and operators, food suppliers and equipment reps were there. And so were Texas farmers and ranchers.

On the menu were conservations about modern farming and ranching.

Restaurant owners and chefs learned more about food production and the farm families behind it. And the farmers and ranchers were able to meet those who cook with their products.

Texas is one of the hottest growth markets in the country with restaurant industry sales of $70 billion.

Attendees were surprised that less than two percent of Americans grow food, fiber and fuel.

Modern agriculture puts food on the plates of Texas restaurants. It’s a relationship worth talking about. And the conservation between producer and preparer continues to grow.