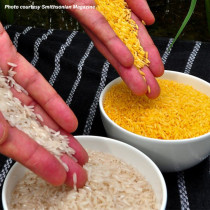 The Philippines approved Golden Rice for commercial production after two decades of development and consideration. It’s the first country to do so.

Traditional rice is a staple for over half of the world’s population. Traditional rice produces beta-carotene in the plant, but the precursor for vitamin A it is not found in the grain.

Thanks to modern science and genetic modification, Golden Rice produces beta-carotene in the grain.

That’s important. Vitamin A is essential for normal growth and development and for vision.

World health officials say vitamin A deficiency causes up to 500,000 cases of childhood blindness every year, with half of those dying within 12 months of losing their sight.

Farmers will be able to grow Golden Rice exactly the same way as traditional varieties.

The United States, Australia and Canada have ruled Golden Rice safe for consumers, but they have not yet approved the variety for commercial production.

The Philippines is leading the way to the field.