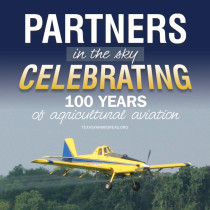 A century of agricultural aviation

This month marks 100 years of agricultural aviation in the U.S.

U.S. Army pilot John Macready made the first aerial application during an experimental flight on a Curtiss JN-6 “Super Jenny” in 1921.

It was after the end of World War II that the industry really took off. Thousands of pilots returned from the war effort. Airplanes were cheap, and pilots were plentiful, so an industry that had grown slowly before the war began to expand rapidly.

Technology has put aerial applicators at the forefront of precision agriculture. Today’s airplanes are safer, faster and able to cover more acres per hour than ever before.

Disbursal systems allow for exact placement of the products being applied. A variable rate of product allows pilots to apply only the exact amount of product needed. It’s precise, and it’s targeted.

The results are increased yields for Texas farmers who battle insects and plant diseases every day.

Aerial applicators are partners with those on the ground. We celebrate their century of contributions in helping to feed a hungry nation.