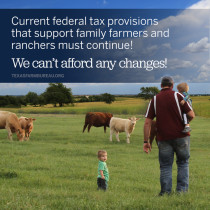 Mr. Secretary, you swung and missed on stepped-up basis

A national opinion column by the U.S. Secretary of Agriculture is usually a good thing for America’s farmers and ranchers. Not this time.

Secretary Tom Vilsack completely missed the mark in his op-ed in The Wall Street Journal on Sept. 8.

Vilsack claims changes to the capital gains tax sought by the Biden administration to pay for spending priorities will not hurt family farmers and ranchers.

Farmers already have an exemption with the current stepped-up basis. This proposal takes away that exemption and replaces it with promises of a tax deferral.

A tax deferral is still a significant liability hanging over the business. A tax deferral will make getting operating loans more difficult, which makes maintaining and growing the business extremely challenging.

Eliminating stepped-up basis would lead to more consolidation of farms. Small, family-owned farms could be forced out of business because of the tax liability.

This isn’t a partisan issue. The tax package supported by House Democrats rejects the changes promoted by Vilsack and protects stepped-up basis.

It’s also an issue that reaches far beyond agriculture. Any family that has worked to build a business will be affected.

Agriculture is also guarding against other tax changes, such as decreasing the death tax exemption rate, raising capital gains and prohibiting the use of Like Kind Exchanges and Sec. 199A business income deduction.

If some people are abusing the tax code, they should be dealt with. But we should not punish the millions of hard-working Americans who have used tax provisions as they were intended in hopes of passing their business to the next generation.