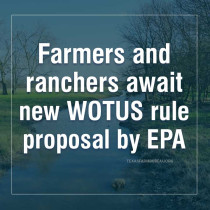 The U.S. Environmental Protection Agency (EPA) wants to reintroduce the definition of the “waters of the United States” to a definition that was established in 1986 and in place through 2015.

That definition was overly complicated. It unfairly regulated large areas of private land miles from the nearest navigable water, including property in Texas.

The answer was the Navigable Waters Protection Rule established by the Trump administration. It was a workable definition that provided regulatory certainty to landowners, while protecting our waterways. That rule is now being washed away.

Farmers and ranchers are disappointed in the EPA announcement.

EPA will soon initiate a new rulemaking to define federal jurisdiction. Agriculture awaits to see what those plans are.

Farmers and ranchers hope to have a seat at the table when the framework of the new rule is discussed.

It’s too important for our nation’s food, fiber and fuel to not be included.