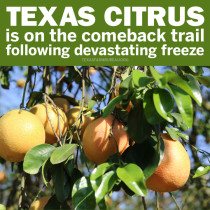 Everybody loves a good comeback story. Keep your eye on the Rio Grande Valley for the next chapter in the comeback of Texas citrus.

Growers have been rehabilitating mature trees that survived, those trees 5-20 years old. They cut back and removed all dead woody material resulting from the freeze.

Extension experts say trees that made it are looking good and showing very good canopy. And, surprisingly, there is some fruit on those trees.

Most crops and orchards were insured, and there is hope that Texas citrus will return to pre-storm levels, according to officials.

But there are other factors in play. Higher costs for fertilizer, fuel and crop protection chemicals are putting a squeeze on citrus growers. Young citrus trees were also in short supply, which was a problem for growers hoping to reestablish their orchards and have fruit in three to five years.

Time will tell. Early signs are encouraging, and it's a comeback story worth watching.