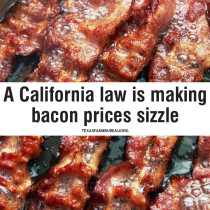 The U.S. Supreme Court on Jan. 7 will consider a petition from the American Farm Bureau Federation and the National Pork Producers Council challenging California's Proposition 12. The proposition bans the sale of pork from hogs raised anywhere that don’t meet the state’s arbitrary production standards.

Studies estimate the new standards will raise production costs about $13 a pig. Only 4% of hog operations nationwide currently comply with the new law. Bacon prices could jump 60% in California.

The petition asks the Supreme Court to consider the constitutionality of one state imposing regulations that reach far outside its borders and stifle interstate and international commerce.

Generally, the Commerce Clause grants Congress the power to regulate trade among the states and restricts states from regulating commerce outside its borders, except for matters related to public health and safety.

Small family farms well beyond California’s borders will be hit hardest. They are forced to make expensive and unnecessary changes to their farms, and this will lead to more consolidation in the pork industry and higher prices at the grocery store.

The new law applies to any uncooked pork sold in the state, whether produced there or outside its borders. To continue selling pork to the 40 million consumers who live in California, which represents about 15% of the U.S. pork market, pork producers would need to switch to alternative sow housing systems. Industry estimates for converting sow barns or building new ones to meet the Proposition 12 standards are in the billions of dollars.

Every family in America will ultimately pay the price for Proposition 12, if the law is not struck down.