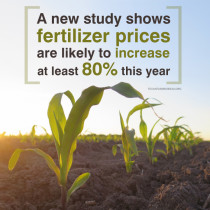 Fertilizer prices to likely increase at least 80% in 2022

Texas farmers know the price of fertilizer is high.

A leading study group has put a sharp pencil to it and answered, “How high?”

The Agricultural and Food Policy Center at Texas A&M University says it now appears fertilizer prices will increase more than 80% for the 2022 planting season relative to last year.

There are also concerns that raising tariffs on nitrogen will create shortages and cause prices to increase even more for farmers.

A major U.S. nitrogen producer has petitioned the U.S. International Trade Commission to impose tariffs on nitrogen fertilizers imported from Trinidad and Tobago and Russia. The Commerce Department has released a preliminary finding recommending tariffs.

Texas farmers are facing the prospect of a huge increase in costs heading into the spring planting season.