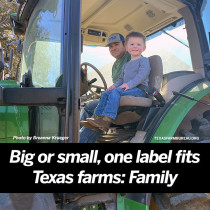 Insights on who’s producing our nation’s food, fiber and fuel

Keep in mind USDA defines a “farm” as “any place that, during a given year, produced and sold (or normally would have produced or sold) at least $1,000 of agricultural products” in Gross Cash Farm Income.

Using this definition, USDA counted 2,010,663 total farms in the report. If you do the math, one single farm produces food and fiber for 165 people.

Nearly all of the farms are family operations. Surprised? Ninety eight percent of all farms are classified as family enterprises. So much for the cries of a faceless, corporate agriculture.

The report drills down even further. It says 89% of farms are defined as small farms. These smaller farms tend to be less reliant upon farm income for their living. Small farms operate 48% of the land while accounting for 20% of the value of production.

The remaining 11% of farms are considered mid-sized and large-scale farms. They operate on 52% of the land and account for 80% of production. These farms tend to be comprised of full-time farm families earning their living from the farm.

Americans are blessed with the abundance of what these farms produce. Americans spend less than 5% of average per capita income on food at home—the lowest in the world, according to Farm Policy Facts.

We are blessed indeed.