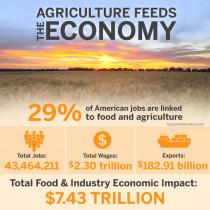 The annual report is called “Feeding the Economy.”

It’s a farm-to-fork economic analysis. It includes direct and indirect economic activity, as well as both upstream and downstream activity.

And the 2022 report is quite impressive, both nationally and in Texas.

Seven percent of the nation’s economy and 29% of American jobs are linked to the food and agriculture sectors, either directly or indirectly. The sectors contributed a total of $3 trillion to the U.S. economy.

In Texas, the economic impacts are Lone-Star big. Food and agriculture provides four million jobs and $194 billion in wages. Total output for the Texas sectors was $631 billion.

Two years into the COVID-19 pandemic, the food and agriculture sectors remained resilient to provide Americans with jobs, economic opportunity and safe food.

They are a bedrock of our Texas and U.S. economies.