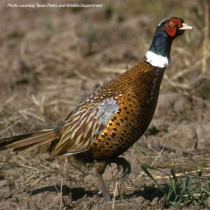 A first case of highly pathogenic avian influenza has been confirmed in Texas.

A commercial pheasant flock in Erath County tested positive for the virus. The premises has been quarantined, and birds on the property have been depopulated to prevent the spread of the disease.

It’s a serious situation for poultry growers. The virus is carried by free-flying waterfowl such as ducks, geese and shorebirds. It can also be spread indirectly through contaminated material.

Federal and state officials say anyone involved with poultry production from the small backyard to the large commercial producer should review their biosecurity activities to assure the health of their birds.

Poultry growers will handle the situation. For everyone else, there is no immediate public health concern. No human cases of these avian influenza viruses have been detected in the United States.

What we can do is practice general food safety precautions. Properly handle all poultry and eggs, and be sure to cook the items to an internal temperature of 165 ˚F.

Avian influenza is really just for the birds, really. Consumers should not be worried.