Posted on May 16, 2022 in Audio, Editorial, Featured, Your Texas Agriculture Minute 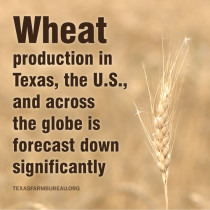 Now, a May 12 USDA forecast confirms it.

Texas wheat production is forecast at 41.6 million bushels. That’s down 44% from last year.

Yield per acre is forecast at 32 bushels. That’s five bushels below 2021. Harvested acreage for grain, at 1.30 million acres, is down 35% from the previous year.

The world’s wheat crops are also under threat.

Production in Ukraine, one of the world’s biggest growers of wheat, will fall by one-third compared to last year. Other major producers are battling drought, floods and heatwaves. In all, global stockpiles are expected to dwindle to a six-year low.

It’s a tough year for wheat, here in Texas and in many spots around the world.