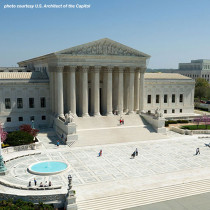 The U.S. Supreme Court is drawing its fair share of headlines right now.

Whether it be stories about rulings of high nationwide interest or the security of its justices, the court is in the news.

Texas farmers and ranchers will be watching the court closely in October when the court’s new term begins.

The justices will hear arguments that month in two cases of interest. The first is a case involving two Idaho landowners who challenged Environmental Protection Agency (EPA) jurisdiction over waters on their property.

Pundits say the court could use the case to significantly alter the way EPA and the Army Corps of Engineers determine what is or is not a Waters of the U.S.

The justices will also hear arguments in October in the challenge to California’s animal housing law, Proposition 12.

The case was brought by the National Pork Producers Council and American Farm Bureau Federation. The question is whether Prop 12 violates what’s known as the “dormant Commerce Clause.” In other words, can California require other states to adopt minimal housing standards for sows that produce pork sold in California?

It will be interesting to watch both cases.