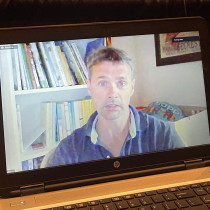 Texas farmers and ranchers are staring at many hurdles right now. Drought, high fuel costs and record inflation, just to name a few.

But farming in a war zone? That’s an extra high hurdle that Texas growers can only imagine.

Ukraine farmer Kornelis “Kees” Huizinga described the reality of his situation to Texas farmers and ranchers during a live Zoom conversation at the recent Texas Farm Bureau Summer Conference.

Huizinga has farmed in central Ukraine for 20 years. He is part of the Global Farmer Network based in Des Moines, Iowa.

He says the biggest problem right now is that Ukraine cannot export what it grows. Seventy-five percent of the nation’s wheat and other commodities must be sold elsewhere. But ports on the Black Sea that handle exports are now closed, due to a Russian naval blockade.

More than 20 million tons of grain are stranded. And another crop harvest is nearing. Huizinga says yields for many Ukraine farmers will fall by as much as 40%because they lacked access to the ordinary tools of production.

With ports closed, there are dire predictions of food shortages and famine in those countries dependent on Ukraine grain.

He could not predict where he, Ukraine agriculture and his country might be in six months. There are too many unknowns from a war that may not end soon.