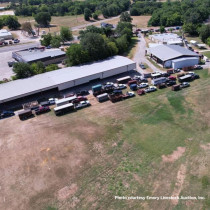 But this is different.

On some highways and county roads near livestock auctions, cattle trailers are lined up for as far as you can see. Ranchers are selling cattle because of drought-stricken pastures, a shortage of hay and lack of water. There’s not much choice for some other than to market the cattle now, well before they would normally plan to sell.

More than four times the normal number of cattle are arriving at some auctions for the weekly sales.

It’s a situation that reminds many of the drought of 2011. That’s a historical reference that Texas cattle ranchers would like to forget.

Ranchers are doing their best. They are drawing from supplemental feed supplies usually retained for winter months. They’re praying for rain. But there comes a point when the numbers must be reduced. And today’s herd reductions ultimately mean lower production levels across Texas for years to come.