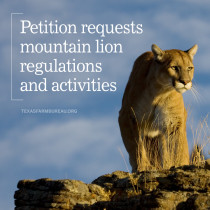 Mountain lions in Texas are a nongame species. They can be trapped and hunted year-round in Texas without any harvest limits, hunting seasons or any requirement to report harvest.

The Texas Parks and Wildlife Department (TPWD) is considering a petition for rulemaking to conserve mountain lions in Texas.

Petition organizers say a scientific state management plan for mountain lions can be accomplished while respecting the ranching heritage and landowner rights.

The petition asks the state to conduct current research to identify the population size, status and distribution of mountain lions in Texas, require harvest reporting and require 36-hour trap check times, consistent with furbearer trapping regulations. Canned hunting of mountain lions would be prohibited, and a stakeholder advisory group would be formed to collaborate with TPWD on a management plan.

The petition also asks the state to limit harvest in South Texas to five or fewer mountain lions annually until TPWD can determine the population size and status in that area and establish sustainable hunting limits. The limit on take would not include killing a mountain lion for livestock protection, once a loss is confirmed and once a depredation permit is obtained.

TPWD can either deny the petition or put it on an upcoming Commission agenda.

Texas ranchers in big cat country are awaiting a response. They are most interested in the issue.