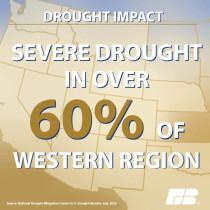 Farmers and ranchers across the Western half of the country continue to battle severe drought conditions.

A new survey of growers in Texas and 16 other states conducted by the American Farm Bureau Federation highlights dramatic impacts from the dry conditions.

The states surveyed support nearly half of the nation’s $364 billion agricultural production by value.

Seventy-four percent of respondents rated a reduction in harvest yields due to drought as prevalent or higher in their area.

Respondents expected average crop yields to be down 38% this year because of drought conditions, with the biggest drop expected in Texas where yields are reported down 68%.

Ninety percent of respondents reported an increase in local feed costs as prevalent or higher in their area.

Two-thirds of respondents reported prevalence of selling off portions of the herd or flock, with average herd sizes expected to be down 36% in the surveyed region. The largest herd decline is in Texas, with herds reported down 50%.

Respondents expect their farm-related revenue to be down 38% from the average year due to drought, with the highest expected declines in Texas to be at 54%.