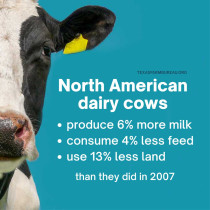 The North American dairy cow is better than ever

Another example is the North American dairy cow.

These cows produce 6% more milk, consume 4% less feed and use 13% less land than they did in 2007, according to a new study released recently at the World Dairy Expo.

The study is from the Association of Equipment Manufacturers, the National Milk Producers Federation and Dairy Farmers of America.

That equates to taking four million cars off the road and enough water savings to supply New York City for two years.

North America is home to only 4% of the world's cows but produces 15% of its milk, according to the study. Texas ranks fourth among states in milk production.

We can thank improved genetics, technology, farm management practices and other innovations. These advances benefit the cow, dairy farmer, environment and society.