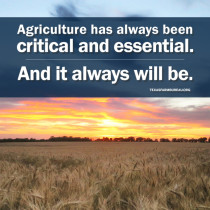 Thompson used the term on a recent swing through Texas to discuss the next farm bill.

The “essential” description is a good one for Texas farmers and ranchers.

Texas agriculture produced $24.9 billion in cash receipts last year. That’s about 5.7% of the national total and fourth highest among all states, according to the state Comptroller’s office.

The economic footprint of the Texas food and fiber system is huge. The Texas A&M AgriLife Extension Service estimates the system contributed $159.3 billion or about 8.6% of the state’s total gross domestic product in 2019.

Agriculture is a job creator. One in seven Texans has a job related to agriculture.

It’s amazing that only 1.5% of our nation’s population grows food, fiber and fuel so everybody else doesn’t have to worry about it.

“Essential” is the right word at the right time. Let’s not forget it as agricultural policy and our national food security are discussed.