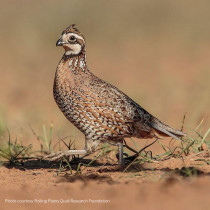 Quail hunting season is underway in Texas. It began statewide on Oct. 29, and it will close on Feb. 26 of next year.

The best area to find birds this season is in South Texas. The daily bag limit is 15 birds, with a possession limit of 45 birds.

Many factors influence the population of quail in our state and their abundance or scarcity in regions of traditional quail country. Researchers are doing their best to better understand those factors.

The passion of quail hunters and their bird dogs in the field is second to none.

Speaking to that passion every month is a popular podcast originating in Texas. It is called Dr. Dale on Quail.

The host is Dr. Dale Rollins, director of outreach for the Rolling Plains Quail Research Foundation in Rotan in Fisher County. Dale is one of the country’s premier quail researchers and authorities.

He was a longtime professor and Extension wildlife specialist in San Angelo before retiring in 2013.

The podcast is available wherever you go for your podcasts and also on the website of the Rolling Plains Quail Research Foundation.

Forty-four episodes of Dr. Dale on Quail have been produced. Just one shy of the possession limit, you might say.

It’s worth a listen.