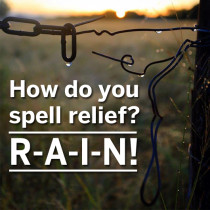 Hardest hit? Texas ranchers. That’s why beef is so high.

But an El Nino in the Pacific now has most of Texas in a favorable weather position.

That is, except for West Texas. Forecasters say Abilene west and north into the Rolling Plains and Texas Panhandle will remain in drought.

Let’s hope the forecasters are wrong for West Texas’ sake.