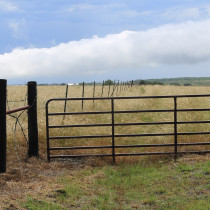 Private property rights are worth fighting for. There have been wars over that principle. People have laid down their lives. Texans believed that 178 years ago this week, when a few dozen of them signed a Declaration of Independence. Texans will still raise a fuss if you mess with their property rights.

Private property rights have been the cornerstone of Texas freedom since Stephen F. Austin brought the first settlers here. They came for the right to own their own land. They established farms and families, built communities and set the direction for a new Texas. When Santa Anna threatened all that, they fought, bled and died for what they believed.

Driven by the incentive of land ownership and the right to use that property to fulfill their dreams, they transformed a wild, inhospitable land into a haven of opportunity. It wasn’t easy. They persisted because private property was the key to their future. It still is.

More than 90 percent of Texas is privately owned. Partly because of that, we are one of the most prosperous states in the nation.

Yet, some have not absorbed the lesson. Private property rights are under attack. The mothers and fathers of Texas fought a war over it. We will fight, too–in court, in Austin and Washington and at the ballot box. It’s still worth the fight.