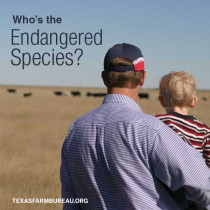 Over 170 species could potentially be listed in Texas. That could cause significant harm to agriculture because most of these critters live on privately owned land.

The Endangered Species Act—chock full of good intentions—is going too far. Many times the federal government paints with a broad brush, restricting land use, agricultural and other economic activity over a wide area. They can list a species even if they have little scientific evidence to back it up.

Activities on formerly productive land are restricted—many times to save a species that’s not even there.

Seems fair to me. That way, farmers, ranchers and threatened species can all stay off the endangered list.