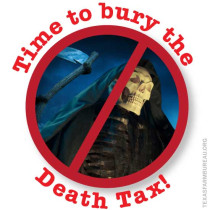 Time for ‘death tax’ to die

Farmers and ranchers have benefited from past congressional action that increased the estate tax exemption.

But estate taxes remain a problem for some. The indexed exemption—now $5.3 million—struggles to keep up with ever-increasing farmland values. Farmers and ranchers can be rich in capital assets, such as land, buildings and equipment. But they’re poor in liquidity.

When that sad day comes, surviving family members have little choice other than to literally sell the farm to pay the taxes.

Congressman Kevin Brady of Texas has a solution. His bipartisan bill to permanently repeal the death tax has support from a majority in the House. He says it’s time to bury this tax that has harmed family farms, ranches and businesses that simply want to keep operating.

Dying is bad enough. Being taxed for it is even worse.