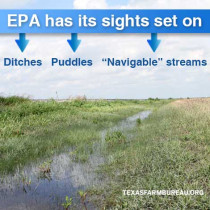 The EPA knows how to regulate, but is it ‘big enough’ not to?

The Environmental Protection Agency has proposed the Waters of the United States rule, a strict new cocktail of EPA overwatch. The word "navigable" sits right there amongst the wording, seemingly clear on Congressional intent of what EPA can and can’t regulate. But the agency has designs on every ditch and mud hole in all the land.

In previous incarnations, the rule has received thumbs down from both Congress and the courts. No matter. EPA will do it anyway. Just change the name to “Clean Water Rule.” EPA's hard headedness has fostered a bipartisan queasiness in Congress. The Senate is looking at it now. Rural America stands nearly unanimous against it.

There is no more powerful regulatory body than the Environmental Protection Agency. Regulation is power. More regulation is more power.

Regulate is what EPA does–often in the form of fines that can run more than five figures a day. It’s a scary prospect for agriculture and rural America.