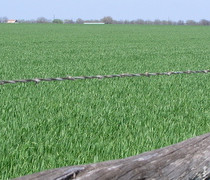 Everything’s bigger in Texas, including the impact of agriculture on the Lone Star State.

According to the new USDA Agriculture Census, Texas leads the nation in land dedicated to agriculture.

Over 98 percent of those farms and ranches are family owned, according to the Texas Department of Agriculture, and we’re not bragging, but we lead the nation in sales of cattle, cotton, sheep and goats. Well, maybe we’re bragging a little.

One of Texas’ best kept secrets is that agriculture adds value beyond the farm gate to the rest of the economy.

According to a report by the AgriLife Extension Service on the last Ag Census, cash receipts of nearly $20 billion for farm and ranch products translated to nearly $100 billion in economic activity for the rest of Texas.

Who benefits? Everyone–from moms at the grocery store, local businesses and the one in seven Texans who depend on agriculture-generated jobs to provide for their families.

Most importantly, as the second most productive agriculture state in the nation, our farmers and ranchers are essential for growing a plentiful supply of food for over 25 million Texas consumers, America and the world.