Posted on May 11, 2015 in Audio, Editorial, Featured, Your Texas Agriculture Minute 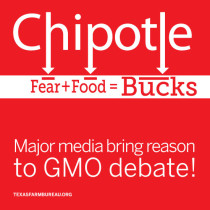 Fear or fact? When it comes to GMOs, some choose fear.

Chipotle, for example. They recently announced they would use no genetically modified ingredients in their menu items.

A storm of criticism and derision from major media outlets followed that announcement. The jeers came from Time, National Geographic, the Chicago Tribune and the Washington Post. Even that bastion of foodie publications, Mother Jones.

The big media boys took on the burrito king over three issues.

Food fear marketing has long been a strategy for Chipotle. But Chipotle’s bluff has been called. The safety and environmental benefits of biotech are being written about.

And—at long last—reason is replacing fear in the GMO debate.