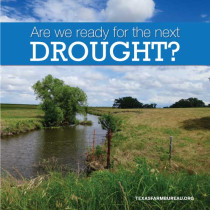 In soggy Texas, time to plan for drought

As a flash flood cascaded around him, an ever-pessimistic West Texas rancher was said to have muttered, “Worst drought I ever saw started just like this!” But it’s not pessimistic to understand that even though record rainfall washed our persistent drought away for now, we are not all that far from another.

Politically, we tend to address those things that are in crisis. Our water needs may not look like a crisis now, but they are. We are using more water than we have a place to store it. And much of that rainfall washed off into the Gulf of Mexico in May.

As we talk about storing water, most folks think of big reservoirs. But there are property rights concerns and eminent domain issues. Environmentalists always fight that approach.

But what if we could recharge an aquifer when those rains come again? We have the technology. And, of course, we need to get serious about conservation as some cities and most farmers have.

The time for planning is not as the last drops drain from the tap.