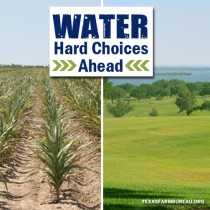 Food on the table or green grass on the lawn?

There's a growing realization in America that food doesn't magically appear on the table. No matter what flavor of food you prefer—organic or conventional—it takes a farmer's knowledge to make it grow. It takes nutrients. Herbicides and pesticides. And most important, water.

A recent national survey reveals that two-thirds of Americans believe water is a limited resource. That it can be depleted if too much is used.

Even more encouraging is 74 percent said agriculture should be a top priority when water is scarce. That was followed by residential needs, wildlife and ecosystems and business and industry.

Perhaps it's the extreme drought in California that has brought a national respect for water. The memory of Texas’ own epic drought is seared in our souls.

Water is life. The tap could run dry. And we have to make hard choices now on how it’s used.

We've had a bitter taste of how bad it could be. Let's plan for the worst. It could be yet to come.