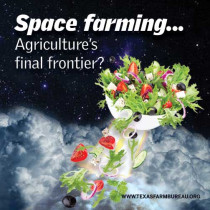 Did you hear the news last week? It was one small step for man. And one giant leap for lettuce?

In a record-breaking bite, astronauts aboard the International Space Station taste-tested the first-ever space-grown lettuce. It was harvested after 15 months with a system that uses red, blue and green LED lights to grow plants in a small container.

This out-of-this-world food paves the way for farming on the space station and even on other planets. Longer missions to distant planets like Mars will require astronauts to put on their farmers’ caps to sustain themselves for years at a time. Fresh food will be both a necessity and a morale builder.

Farmers become more and more adept at solving the challenges Mother Earth presents. I think they are willing to give NASA some pointers and are more than ready to tackle the final frontier.

So beam me up, Scotty. Let’s see what’s out there!