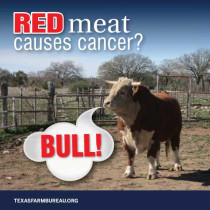 Apparently, it’s time to beat up on beef again. And bacon. And processed meats.

This time it’s the World Health Organization. Their International Agency for Research on Cancer (IARC) wants you to believe that eating ham, bacon, pastrami and salami are hazardous to your health. Right up there with exposure to arsenic, asbestos and cigarettes. They say processed meats cause cancer. They conclude that red meat “probably” does the same.

The report defies common sense. Dozens of studies show no correlation between meat and cancer. It ignores the fact that red meat is rich in protein and a good source of vitamins, iron and zinc.

It doesn’t take into account the probability of getting cancer is based on a number of factors. Including age, genetics, socioeconomic characteristics and lack of physical activity.

Looks to me IARC is smoking something. And it sure ain’t brisket!