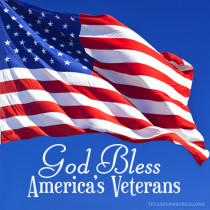 Take time to pause this week and say thank you. November 11 is Veterans Day.

There are over 20 million military veterans in the United States. Three states have at least one million veterans who call it home. Texas is one of those.

The brave men and women who serve and protect our country come from all walks of life. They are friends, neighbors and coworkers. They are parents, children and grandparents. Many are farmers and ranchers. My father was a veteran.

Veterans Day pays tribute to all American veterans—living or dead—but it especially gives thanks to living veterans who served their country honorably during war or peacetime.

Veterans Day originated as Armistace Day on November 11, 1919, the first anniversary of the end of World War I.

It's easy to take national security for granted. We are blessed as a country to have servicemen and women who are the world's best. God Bless America's Veterans.