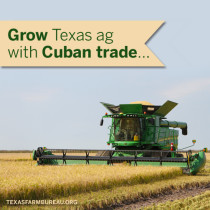 The port of Beaumont to Havana, Cuba is 870 miles. The distance from Beaumont to El Paso, almost the same.

It’s a big state, with a lot of agricultural products to sell. It’s time more cargo ships from Texas make the trip to Cuba again with Lone Star goods.

Prior to the 1962 embargo, Texas was one of Cuba’s leading suppliers of rice. A bag of Sunset Rice from Beaumont Rice Mills was a prominent staple on the island. Now, a half century later, officials say there is still a great deal of interest in the high quality long-grain rice grown in our state.

It’s not necessary to endorse a form of government or all of its practices to have a trade relationship.

Governor Abbott gets that, and so do Texas farmers and ranchers. Up to $57 million in new exports and 1,500 new jobs in our state could result. Definitely worth making the trip.