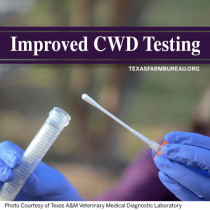 The general hunting season for white-tailed deer in Texas is winding down.

The season has been dominated by information and debate on chronic wasting disease (CWD).

What is it? Why should we be concerned? And how can we test for it?

The last question is interesting. USDA-APHIS currently only recognizes post-mortem tests for the disease. The deer has to be dead for the test results to count.

There might be a better way. There’s a strong push in Texas to develop live animal tests for CWD. Studies are underway. Texas animal health officials say they would readily endorse the practice if there is science behind it.

State wildlife officials echo the sentiment. They hope Texas is the leader in the nation in using live animal testing in the future.