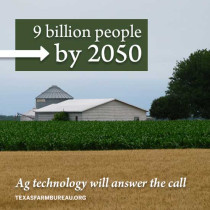 The future of food and hunger

Some say they’re not concerned about modern agriculture feeding the world. But someone has got to worry about it. We are only a scant 34 years away from mid-century—then home to 9 billion souls. We have more than 7 billion now. We’ll need more food from now until then than we’ve grown since the beginning of agriculture. If we don’t get this right, wars will be fought over food. They will be more desperate and bloodier than fighting over oil.

The good news is that smart people are figuring it out. These technologies jump off the pages of science journals and mainstream journalism. Low and no-till technologies preserve the soil. Modern agriculture saves fossil fuels by traveling less across the field. Genetic technologies mean we save water and fuel and use fewer pesticides. We’ve developed plants that are healthier and more nutritious.

As we rush toward 2050 and 9 billion hungry people, developing agricultural technology is more than a good idea. It’s a moral responsibility.