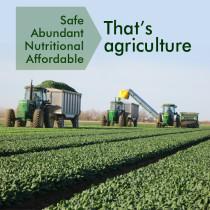 Is there anything in American life that is at the same time so vital and yet so misunderstood as our agriculture? I don’t think so. After spending most of my life among the people of the land, I still view what they do with a kind of awe. The safety, affordability, abundance and nutritional value of our food may be our greatest national treasure. It is so reliable that we seldom think much about it.

We spend less of our hard-earned income on food than any other nation on the planet. And we can have it pretty much our own way. You probably won’t be eating any healthier with organic or local than with conventional. But that choice is healthy and readily available.

If price matters to you, that’s where modern and conventional agriculture really shines. The nice thing is there’s not any evidence that eating that way is any less healthy.

So 21st Century agriculture is a big tent. We can live there—safe, healthy and food secure.